On 23rd August 2020 we (ESC Covers, EuroVisionMusic, Eurovision Coverage and Destination Eurovision) started publishing pictures of  VICTOR BUSH modeling a Eurovision t-shirt and holding the promo material for that entry. It is to make artists aware of entering the COVER2COVER SINGING contest we are arranging – closing date for entries is 30th October 2020. We have decided to stop the shot short videos as I for one do not know how to upload them on our Youtube channel and the ones we have published so far received a weak viewing response. We will publish the t-shirts at random and the seventh one is from RUSSIA 2018 – I WON’T BREAK by JULIA SAMOYLOVA.  In total we will publish for 40 days in a row a different t-shirt. 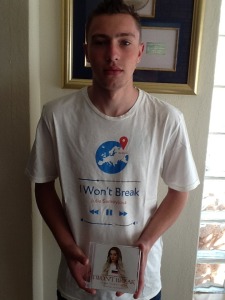 JULIA SAMOYLOVA, who represented RUSSIA at the 2018 Eurovision song contest, has a new song out called SUMMER.

Julia Samoylova will perform I Won’t Break for Russia at the 2018 Eurovision Song Contest in Lisbon, Portugal in May.

Last year Julia was denied her chance to perform for Russia due to political reasons but this time she is back and will take to the stage to represent her country.

You can see the music video for I Won’t Break below.

After much speculation it has finally been confirmed by the broadcaster, Channel One, that Julia Samoylova will represent Russia at the 2018 Eurovision Song Contest in Lisbon, Portugal in May.

In 2017 Julia was not able to represent Russia in Ukraine because of political problems. She had already released her song Flame Is Burning but was unable to take part.

Now Julia will have that chance to represent Russia in Portugal. Her new song will be officially released in the coming weeks.

In the meantime check out Flame Is Burning again below.

Statement from the EBU regarding Russia’s participant in the 2017 Eurovision Song Contest:

It has been confirmed to the EBU that the Ukrainian authorities have issued a travel ban on the Russian artist chosen for the Eurovision Song Contest, Julia Samoylova, as she has been judged to have contravened Ukrainian law by entering Crimea in order to perform.

We have to respect the local laws of the host country, however we are deeply disappointed in this decision as we feel it goes against both the spirit of the Contest, and the notion of inclusivity that lies at the heart of its values.

We will continue a dialogue with the Ukrainian authorities with the aim of ensuring that all artists can perform at the 62nd Eurovision Song Contest in Kyiv in May.