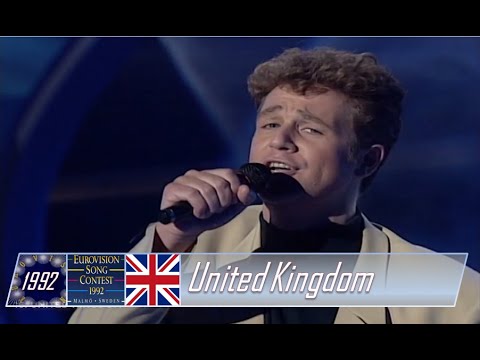 Morten Thomassen writes today of 1992 when the top 3 were all English songs. ESC Covers google translated this from Norwegian to English.

Today we are going back to the first year I got to experience ESC live from the hall.

There I experienced that the British Michael Ball was 16 points short of depriving Ireland of victory, the third victory in which Johnny Logan was involved.

16 points was also the distance down to the third place occupied by our friends from Malta.

Thus ended the three English-language songs on the podium, so it is quite possible that in a small way it was the starting point for the fact that the language rule was to be lifted, who knows.

The advantage of singing in English was in any case very obvious, so it was probably not “One Step Out Of Time” that the language rule was changed 7 years later.

Young Mr. Ball, who turned 60 this summer, is best known in his home country for his efforts on the musical stage.

“Les Miserables”, “West Side Story” and “Sweeney Todd” are among the famous musicals in which he has played major roles.

However, he has not been on the lazy side when it comes to releasing music and holding concerts.

As recently as 2021, he released one album, so in this sense he is a very active artist, but it is questionable whether he is what the BBC will want to bet on when they choose an artist to sing on home turf next year.