LENA PHILIPSSON, who represented SWEDEN at the 2004 Eurovision song contest, has a new song and video out. It is called STOCKHOLM. The video shows scenes of Stockholm, and those that attended Eurovision 2016 in Stockholm will recognize some scenes. 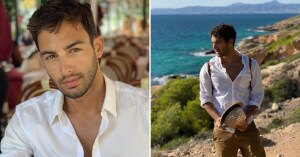 Darin Zanyar came out on Instagram as gay. The 33-year-old is one of Sweden’s most famous pop stars – with seven number one albums. The singer with Kurdish roots has also become a role model for the Kurdish community through his courageous step.

Darin was born on June 2, 1987 in Sweden, his parents come from Kurdish Iraq . In 2004 he took part in a Swedish singing show and made it to the finals. Although he didn’t win, his career took off afterwards. With seven number one albums, he is now one of the artists who have sold the most records in Sweden.

In 2o10 he took part in the Swedish Eurovision selection with YOU’RE OUT OF MY LIFE.

Because ESC Covers is a cover website, you were interested in Darin’s cover of the 2004 Eurovision entry from Lena Philipsson DET GOR ONT.

It hurts, the 2004 Eurovision entry from Sweden was covered in Afrikaans by Hi 5 as WEER SE DIT WEER.